Deaths of 1,000 unidentified people to be reviewed by police


Deaths of 1,000 unidentified people to be reviewed by police 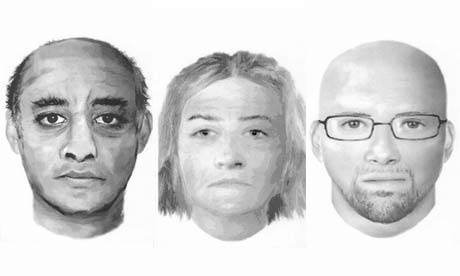 Three of 20 e-fits released by police of people who have died on Britain's rail network over the last 35 years. Photograph: PA
More than 1,000 unidentified bodies found across England and Wales over the last 50 years could be named as a result of a sweeping cold-case review.
Police said they want to "put an end to the story" for many families left bereft by the disappearance of loved ones who have never been traced.
Officers have launched a £50,000 review using the latest forensic techniques and public appeals aimed at putting names on the files of non-suspicious deaths.
Sketches of the faces of 18 men and two women found dead on the railways and London tube network have been released to mark the first stage of the operation. Causes of death for the 20 include suicide, accidents and natural causes in London, Hertfordshire, Sussex, Coventry, Essex and Cornwall over the last 35 years.
The appeal was the result of a review by the National Policing Improvement Agency (NPIA), which is responsible for the Missing Persons Bureau, and British transport police.
It will be followed by further reviews, starting with forces in Kent, Sussex and Hampshire, where many unidentified bodies have been found off the south coast.
Peter Neyroud, 51, head of the NPIA, said police have not always offered a "terribly good service" when faced with relatives of missing people.
He said colleagues attempting to clear up unidentified bodies were faced with a mountain of ageing paperwork, some of which was badly compiled and in a poor condition. "Many of these cases go back almost as long as I have been around. A lot of this is to do with the fact that technology and methods of identification we have now were not available.
"It is extraordinary how many people know somebody or have somebody in their family who has gone missing. We want to work with forces across the country to find the end of some very sad stories."
The Missing Person Bureau database holds the names of around 44,000 people who have been missing for more than 72 hours. Some date back 60 years.
Police have picked 20 of the "more straightforward" cases from more than 1,000 unidentified bodies who they believe they may be able to name.
The cases date from January 1975, when a woman was struck by a train at Victoria tube station. The most recent was last December when a man died on tracks near Plumstead station in south-east London.
Detective Chief Superintendent Miles Flood of the British transport police, which released their sketches, said up to 300 people are found dead on the railway network every year.
"We have obviously fully investigated these cases. There is nothing suspicious about the deaths," he said. "These are people who died from natural causes or other means. For me, as a police officer, I do not like unsolved cases and although every case was investigated and every clue followed up, we have been unable to do so."
But, according to Neyroud, police have encountered some resistance from coroners when trying to reinvestigate deaths that were dealt with many years ago, particularly when trying to get DNA samples.
He added that advances in DNA testing include a new technique that could yield a result in 45 minutes without the need to send a sample to a laboratory.
Investigators are able to draw on expertise from the National Injuries Database, DNA and fingerprint databases, and age progression and forensic artists.
Anyone with any information about any of the people pictured is asked to call the British transport police on             0121 634 5613      .

Decaying blurry photographs and even a CCTV grab were used to "bring to life" 20 unidentified bodies for a public appeal, an artist said yesterday.
Police facial imaging specialist Sharon McDonagh, who is based in Leeds, West Yorkshire, said she used mortuary photographs to create her sketches.
McDonagh said many of the photographs were of poor quality and in bad condition, particularly pictures from files up to 35 years old.
She said her sketches were created in the style of modern e-fit suspect photographs because they have a good record of being recognised by the public.
In one case, that of a man struck by a train at Harpenden in 2004, the artist used an image from CCTV footage as no mortuary photograph was available.
McDonagh said: "I was given mortuary photographs of the deceased. What I normally try and do is combine an e-fit with free hand drawing.
"The public are quite good at identifying images from e-fits so I try to make the drawings look like them.
"Some of the photographs were from 1975 so they were quite blurry images.
"I am confident these images are good representations of these people and hopefully someone will come forward and identify them."
Posted by Jane Billingham Forensic Artist at 15:55