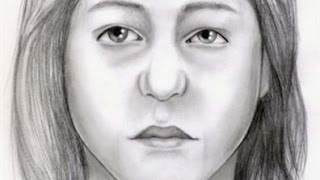 NEW YORK –  Police have released a composite sketch of an unidentified victim whose remains were among those of 11 people found along a remote New York beach highway last year.
The sketch released Saturday is of a woman whose partial remains were found along Long Island's Ocean Parkway last April. Suffolk County police say other remains of the same person were also found on Blue Point Beach, Fire Island, in April 1996.
Investigators believe a possible serial killer is responsible for 10 of the bodies. The remains of an 11th victim -- a 24-year-old woman named Shannan Gilbert -- were found in late December. But authorities say Gilbert accidentally drowned.
Suffolk County police are asking anyone with information about the woman's identity to contact them or call Crime Stoppers at 1-800-220-TIPS.
Read more: http://www.foxnews.com/us/2012/01/08/police-release-sketch-unidentified-possible-serial-killer-victim/#ixzz1isjKVJaE
Posted by Jane Billingham Forensic Artist at 07:41 No comments: Links to this post